My right hand is kinda hurty because a surgeon took out a non-standard issue part, yesterday and wrapped it up with some gauze'n'stuff. OT, but do you ever notice how bandages and casts are like snow? When they're all new and sparkly you get, like, GIGAsympathy. But, when the bandages get sorta shopworn or your cast has things like, "I'm on stoopid!" with arrow pointing at YOU, well, people start thinking that you're homeless or clumsy or whatever. Just a thought.

Southern Beale, who has a very nice, generally civil blog, is a bit of firebrand at times. I like that about her blog--also, too, she does most of the heavy lifting with sources and suchlike. The only drawback is that general civility of hers. It often is extended to mouth-breathing, braindead fucktards and other KKKonservaKKKlowns of the reptilican stench,  er, I mean, "stripe", yeah, that's what I meant. Wait, a second, skunks are stenchy AND stripey. Winning!

One of her more obdurately indignorant trolls is a feller who signs as "Jim from Memphis". He seems to specialize in trollin' any OP/blog thread that has a progressive liberal flavah. His latest attempt at "proving" how wrong liebral ideas are was on this thread:

about the upcoming vote for union representation at the Volkswagen plant in TN.

Along comes Jim with his completely nonsensical assertions, straight from whichever "Screw off the top-o-yer skull and shovel in some GOPbullshit" meeting or website he was at after being assigned to disinformatitize the thread.

I tire of this idiocy, it's never original, and it's never undebunked. It's always the same boilerplate horseshit that is a specialty of the ReiKKKwing noise machine.

I tend to be less patient than most folks and when my hand hurts and I have to waste my time with assholes like Jim, lest his lies go unchallenged, I tend to be, um, impolitic. Whatever.

Jimbo, this one's for you, you braindead fucktard.

Fortunately, for you, Jimbo--and the rest of the Teabaggist Indignorati that sometimes infest the threads here--my hand is wrapped up in a lot of gauze and tape after having something removed from it yesterday by a nice bunch of doctors at that socialist VA Medical Center in Syracuse. Because of the limited freedom of movement and some pain in that hand, I won't be bothering with completely deconstructing your Randian talking points.

Union contracts ensure that people that the union sends to do a job are actually qualified to do it.

Your precious "Free market" approach to doing things--always with the least skilled/cheapest labor available leads to mining disasters (UAW people are NOT in management, the management that makes the stupid/criminal decisions about mine safety that result in those disasters). Teacher's unions work with both the state and various school districts to make sure that teachers are qualified/certified to teach the subject and to work with the student population--unlike private KKKristian schools and homeschooling religidiots who teach "creationism" and bogus, revisionist history as a matter of pride.
No union, at GM, Ford, Chrysler, U.S. Steel, Cannon Textiles, Computer City, Sears, J.C. Penney, any Wall Street Investment house, any major bank or the hundreds of other companies that have lost $Trillionz, FUCKING TRILLIONZ, JIMBO, in the last 30 years--gambling with their shareholders' equity (and, in many cases, their employees pension funds) on some "get rich quick" scheme.

Nope, sunny jim, it's capitalist managers/owners that have made every fucking one of those decisions whether they were offshoring to Asia or keeping the jobs as close as Mexico--cutting costs AND quality by having unqualified chuckleheads making decisions to take short term profits and externalize long term environmental and infrastructural damage or practice economic terrorism against communities that don't want to "get along to go along" (per Mr. Sam).

And do you know who RILLY HATEZ ON UNIONZ, Jim? Well, here's a hint; it ain't democrats, liberals, progressives or reasonably sane republicans. The folks that HATE unions are, overwhelmingly, uneducated/ineducable boobz like you--useful idiots to the 1%'ers--the investing class AND totalitarian leaders of every stripe.

There's an enduring and completely false meme amongst the gunzloonz that Hitler's worst anti-democratic act was to strip teh jooooooos of their gunzrightz*. But, long before Hitler's heinous "Final solution" was implemented, waaaaaaaaaaaaaay back in 1933 he had gutted the union movement in Germany by rolling up all of the various trade unions into TWO unions, both subservient to the Nazi party**--after jailing, beating, killing and otherwise intimidating their various leaders. This was accomplished simultaneously with their outlawing of political parties who opposed the Nazi's militarism, nationalism, expansionism and totalitarianism.

So, the company you keep, in your anti-union feelings, is at best a group of greedy, deceitful and callous profiteers; at worst, it is a band of murderous fucking thugs with the blood of millions on their hands. Oh, I almost forgot, them guyz? they're all racists, too. Sorry, Jimbo, it seems that you're in bed with a buncha guyz who all won the asshole quinella.

You, the guy who makes so much fucking money that Obamandingotaxation  is puttin' a hurt on you? You're poor; if you ever had a soul, it's homeless.

*  Which didn't make a pisshole in a snowdrift's difference to how the jews were dealt with. If they had resisted with gunz they would simply have died sooner when their entire community was leveled by Wehrmacht tanks or Luftwaffe bombers

** Another enduring meme of the ReiKKKwing is that 'Dolfie HAD TO stop teh unionz, cuz they was corrupt commies. Oddly, his litany of invectives against unions was something like that he employed when talking about European Jews, gypsies, slavs and other undesirables and "sub-humans".


You may now return to watching the Schochi Olympics or some other timefillin' activity you were involved in--just so long as it isn't work!!
Posted by democommie at 12:45 PM No comments:

cross-posted with permission from myself

The radical right is notoriously fact-averse, and engages in outright lying, deception and misrepresentation.
That is sadly true of the Minnesota religious right political activist group, The Minnesota Family Council as well.

On February 7th, that group sent out a mass-mailing that is clearly designed to create the misconception that patriotism, and especially the first Amendment, is under grievous attack from our public school system. The reality could not be further from the truth, but the error persists unaddressed and uncorrected in the right wing media and blogosphere bubble, and it persists in the attempts to use that propagandist fear-mongering to raise money for their cause. (When you have to lie, you're losing.)

Here is the claim from the email, and the link to the original false story at - no surprise - Fox News, complete with the usual obligatory deceptive image of a large American flag to make an emotional rather than rational appeal. taking a swipe at inclusion and multi-culturalism along the way: 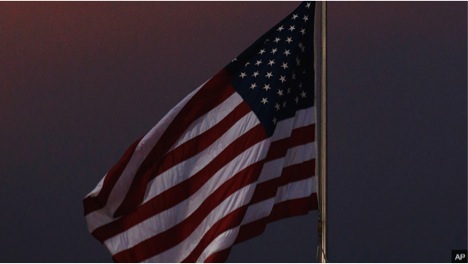 "Students and parents at a Colorado high school are outraged after administrators turned down their request for a spirit week day honoring America because it might offend non-Americans.

'They said they didn't want to offend anyone from other countries or immigrants,' a 16-year-old member of the student council told me. 'They just really did not want to make anyone feel uncomfortable.'"

Of course, as is usually the case with these hysterical stories of conservative victimization, it's not true. In fact, it is not even remotely as represented by Fox News and the Minnesota Family Council's little fund-raising fear-mongering hate-promoting anti-public education system email.

This is the statement they released: As Poudre School District, FCHS Student Council students and FCHS administration have continued discussions regarding the Spread the Love Week dress-up days, additional clarifying information has emerged.

Based on these conversations, we now understand that miscommunication and misunderstandings clouded the situation.

Originally, FCHS Student Council proposed Merica Monday (based on alliteration) as a dress up day to show pride in our country. Administration discussed concerns about the negative connotations of the term Merica with regard to being inclusive to the entire student body. At that time, Student Council presented alternatives including America Monday, My Country Monday and Patriotic Day. At that time, FCHS administration agreed to My Country Monday, but later reversed the decision. Amidst media and community attention, FCHS Administration and PSD released a statement earlier this week focused only on the negative connotations of the terminology surrounding Merica Monday and announcing Monday would be America Day. This offended members of the FCHS Student Council who had previously suggested this alternative. As a means of resolving the situation, both sides discussed the issue at length on Thursday. Everyone agreed that both sides had the best of intentions but missed opportunities and miscommunication caused the situation to escalate. Additionally, everyone agreed that all parties involved are proud of their country and this situation is not an indication that anyone involved is unpatriotic.

Student Council and administrators are committed to working as a team for the benefit of all FCHS students.

Spread the Love week is about unity and raising funds for the FCHS charity of choice, Respite Care Inc. It is about taking the time to see the good in our community. Dress-up days serve as a way to express our pride in the school and each other. They also serve as a means to get the student body excited to give to those who are less fortunate. Next week, it is important to remember that we are here to support each other and make our school, our town and our world a better place. We are Fort Collins High School and we are here to Spread the Love.

We encourage the Fort Collins High School and Poudre School District community to join us in Spreading the Love and donating to Respite Care Inc.

Yeah, NOTHING about making anyone feel bad about being American.  NO assault on our first amendment rights or anything remotely like what the radical right is claiming.  Radical righties are a bunch of dirty, ugly, bigoted liars.