It appears that Congressstepfordwife Michele Bachmann is aiming to be SP-Mark II* and St. Sarah the Wasillabilly has, AGAIN, quit her job--in this case the further cheapening (if such a thing is even possible) of the GOP's current campaign to regain the WH in 2012.

I was talking to a friend of mine, a genuine republican, who told me that his business is almost back to the level it was at before the Obamacession of 2008**.  He said his business was on track to equal its revenues for 2008--if the politicians quit fucking things up.  He was not talking about the democrats.

Meantime, between the Religiotards and the Gunzloonz we have more than enough of teh Batshit KKKrazzee to last through this century, never mind the current election cycle.

MissyB has said, publicly, that she WILL do what her husband tells her to do.  Considering that her husband is a quach who MADE her become a tax lawyer and who also runs a "Gay reparative" MH practice, well, it sounds like a recipe for disaster to me if she gets in the Oval Office.,

"And it's not surprising then that they get bitter, they cling to guns or religion or antipathy to people who aren't like them or anti-immigrant sentiment or anti-trade sentiment as a way to explain their frustrations,"

was said, by then Senator Barack Obama, it was decried by the Reichwing as a slam against the "average man".  Well, I suppose that's true, if you think of the "average man" as being a mouth-breathing troglodytic, superstitious, religiofanatical 2nd Amendment fetishitst.  Average men, regardless their religion or political persuasion, accept that the world is NOT modelled for them, by their favorite diety--as much as they might like it to be.

Average men (and women, as well) know that this world may be depended upon, to be undependable.

Now, then, to the gunz thing.  After months of reading posts and comments at Mikeb302000's blog I have arrived at the conclusion that for a certain subset of MurKKKins, gunz ARE religion.  They are both a tool to achieve salvation and, in some cases, salvation itself.

I will admit that I have NO FUCKING IDEA how that conflation takes place in the heads of the gunzloonz, but that it happens is pretty damned obvious.

Seeing gunz as the tool for achieving justice, equality , security and self-respect is a lot like having nothing but a hammer in one's "toolbox".  When all you own is a hammer, every problem looks like a nail.  When your only tool is a gun (and not just a hunting weapon but something like an AR-15 or a Desert Eagle) than every "problem" starts to look like a would be strong-armed robber or home invader.

I will admit that I finally got a "home defense system".  His photo is at the top of my last post.  Buddy has exceptional hearing, an incredibly sensitive nose and a good set of lungs.  He is my first line of defense.  If someone breaks in the house--or stands on my porch, he's gonna make da noize and alert me.  I'm then going to dial 911 and take my chances that the door and mattress will slow down any but the most dedicated assassin until the jackbooted Officer Friendlies show up.

I could say a lot more on this subject but why drain the boil with a single lancing?

Besides, buddy just read this and said,"Yeah, right, that;'s great.  demoDUDE, throw me a bone.  No, I mean, it throw me a frikkin' BONE!.  Let's do "walkies", you know what a babemagnet I am?"

**    Oh, yeah, go ahead and ACT surprised that the Uppitykenyatalizaridiantimetravellin'
plot to wreck the MurKKKin economy was uncovered--I'm pretty sure it was in the
Whirled Nuts Daily.
Posted by democommie at 8:49 AM 2 comments:

This is "Buddy".  Some of you may remember his photo from my christmas missive of two seasons back, or not. 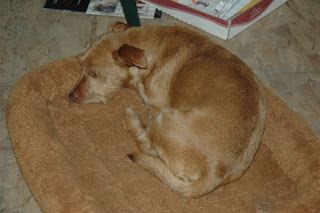 Buddy is a mixed breed, approximately half dachshund and half gesundheit! You're welcome!  He's convinced that he's a Rottweiler but I don't let him tangle with the big dogs, wouldn't want him to embarass them.  He's also approaching middledoggieage, he's about seven.  He was a rescue, by the lady who I got him from.

He's living with me because the nice lady who had him for two and a half years is terminally ill and she wanted to be sure he had a good home (her son has 3 chihuahas and Buddy, he don't play dat) I told her that if she couldn't find anyone else to take him, I would.  I'm pretty sure she stopped looking after that.  The good news is that Buddy is housebroken, loves people and doesn't smoke.  The bad news is he drinks my beer, cheats at cards and farts, OMFG does he fart.  I mean you'd swear that no 15 pound dog on earth could make that much noise and stench, I mean you'd prolly guess it was the work of someone, like, my size.

I caught him messing around on the computer yesterday, so if you get any weird anti-cat screeds, I'm not the one sending them, capice?  BTW, he might be checking my references and credit rating.  Ixnay on the ruthtay if you get my meaning.